I was lucky enough to visit my little bro in Mexico last summer as we backpacked down the Caribbean coast for almost a month. It was an incredible experience that reminded me exactly how wonderful the world is, if you have the opportunity, see it!

I went quickly from the grey streets of Bristol and my desk-bound job to being barefoot drinking rum on a tropical beach; here is my day by day journal of those 3 weeks that ultimately inspired my move to the other side of the world…

Arrived into Cancun airport to a wet scene, reportedly 30 degrees though…long wait in customs for the passport check then picked up my bag and got a bus to the centre of Cancun.

The hostel proved difficult to find, made worse by the extraordinary humidity and the fact I was wearing jeans, bad move! Checked into the hostel, couple of beers with the other guests then up to bed for Robbie, my little brother who had been living in Mexico City for the past year, to arrive at about 30 mins later, let the adventure begin!

Up and about for around 11, checked out and headed for the bar to catch the Germany match (the 2014 Football World Cup was on at the time)…some greasy Mexican brunch and then hailed a taxi to the ferry terminal – we were headed out of the city for island paradise, in the shape of Isla Mujeres.

Awesome taxi driver, stunning turquoise water and quickly on our way (complete with a saxophonist on the ferry sundeck) to Isla Mujeres.

We arrived at Isla Mujeres and headed for the Poc Na hostel in time to check in and watch the Brazil game! Brilliant little place and the sun was booming all day. Headed to the MOST incredible beach for the afternoon and evening, chilling with some tunes and catching up with my bro. Playa Norte has been heavily featured in various World’s Best Beach polls and lives up to the reputation, with perfect waters, sands and dotted palms, We headed back to the hostel at around 8 for some food and to start on the cocktails. 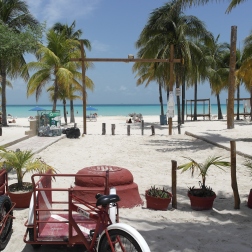 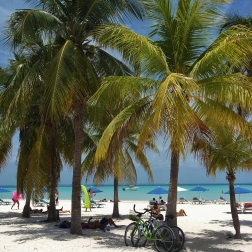 Had a few drinkies whilst being serenaded by a local band then headed out to the beach (10 yards from the main hostel area) for more drinks at the beach bar and a spot of dancing.

Met a few great people who were at the hostel before hanging out for the rest of the night with a wedding crowd from Ohio/Mexico…awesome fun, especially the bride’s brother Miguel, 5 foot nothing but full of beans! Headed out to a club before rolling in at 4.30AM, great day and really fun night! P.S. the hottest nights sleep of my life, drenched in sweat throughout.

Groggy start thanks to last nights antics, the still mugginess of the room not helping! Off to the beach in the glorious sunshine to recharge the batteries and freshen up in the sea. Feeling a bit fresher, we headed back to the hostel to book a whale shark trip (the massive draw of Isla Mujeres) and got ourselves together.

Out for some late lunch around 4PM with the Holland v Costa Rica game, sadly Holland won on pens. Back to the hostel we chilled by the volleyball court and beach bar with a few Dos Equis before tucking into an awesome barbecue put on by the hostel.

Robbie ducked out for an early night but I stayed on the dos Equis/ rum and cokes with Matthew (a proper lad from Byron Bay in Australia) and the Aussie girls. We moved to the beach bar for around 11PM to watch some fire dancers before cocktails and dancing but managed to get to bed for around 2AM in preparation for whale shark morning!

Up at 7.45AM in time to prep and get some breakfast before setting off on our whale shark adventure we were both feeling suitably refreshed. We met our group and headed down to the main pier, unfortunately the numbers weren’t adding up, so Robbie and I were split onto separate boats. 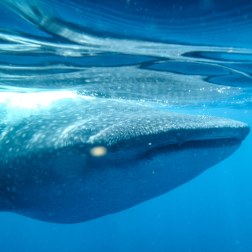 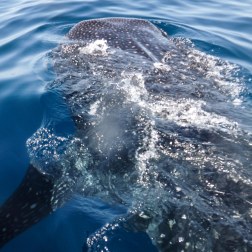 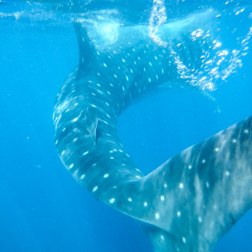 My speed boat consisted of 2 American families and a couple of young Aussie lads. Glorious sunshine (along with a 🐬 or two) accompanied us on the 90 min trip to the whale shark site. A fair few boats were milling about and straight away the frequency of the whale sharks became clear as the enormous yet graceful fish were swarming all around us!

We dipped in in groups of 3 (including our guide, whos name I can’t remember) and swam straight up to the beasts which was truly incredible – the gentle giants allowed us to swim serenely alongside them, occasionally slapping us with their tail, and dive beneath them…awesome experience. We also saw the odd ray breaching the surface, potentially a Mobula ray, but there were apparently Mantas about too!

We all got 3 swims with the sharks before heading off towards the head of the island to snorkel and eat ceviche. Not much as far as the coral or fish went, but was reunited with Robbie and managed to find an awesome cave to swim through!

Half way through lunch we spotted a lady in trouble over the reef, all other boats had gone so I dived in like Hasslehoff joined by the guide to help her aboard and settle her down before heading back to the main pier to end the tour. An unreal morning/lunch swimming with the worlds biggest fish! 🐋

Back to the hostel to say bye to the Aussies (Matthew, Carly and Belle) and chill on the beach hammocks for the afternoon with the kindle, iguanas and music. Chilled around the hostel but got an early enough night so we were fresh to head to Playa Del Carmen the following day.

Woke after a sweaty sleep and headed to Playa Del Norte for one more sesh of sun bathing and waboboboba before packing up and hopping on the ferry at around midday.

A short cruise across the ocean and we were back in Cancun, where we got a taxi to the ADO (bus terminal) and a shuttle straight on to Playa Del Carmen! The journey took about 1.15 and we were in to 3B Hostel, which we had pre-booked, by 3PM. 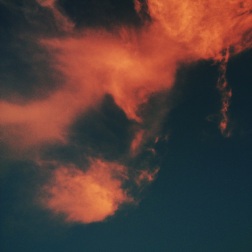 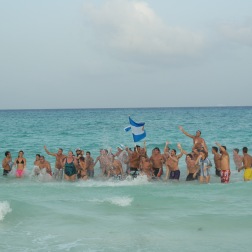 My Bro and Me Smashing Rum on the Beach | Mexico

Checked in and sorted we headed for the beach, trying to find a secluded spot we were led on a wild goose chase by a lovely, if completely clueless, Mexican fella. He ended up pointing into a woodland which went nowhere but we did see a few cool animals including a raccoon/lemur, yellow bird and weird pig horse rabbit thing!

We did get to the right end of the beach though a chilled for the afternoon, buying a bottle of spiced rum and drinking that until the beach was deserted at around 11PM. Playa Del Carmen’s beach is the definition of picture perfect, lucid turquoise waters, white sands and palm tree lined – heaven.

We popped on to the strip and to another hostel but there was not much activity so headed home to hit the (air conditioned) hay.

Woke with a raging pressure headache (still lingering with vengeance from my bit of free diving through the aforementioned cave) but headed off to the beach for a chill with some tunes.

Headache became far too much despite some refreshing mango and pineapple so headed for a nap via the pharmacy. Woke in time for the semi final so headed up to the rooftop to watch it by the pool! Matthew and the girls from Isla Mujeres joined us and we sunk a few Sols as we watched Germany humiliate the Brazilians 7-1.

A BBQ followed before getting changed into some dry clothes and we headed into town, the 3 amigos (us 2 plus Matt), ending up at Mandalas. Tune after tune and wall to wall dancing until 4AM, a wicked afternoon/ night all round!

Lots of sleeping after boogying the night before…woke at around 12PM in a slightly sweaty room. Got up and ready to head to the beach for some midday waboba and chilling. Found a nice little spot to the right of the pier to wile away the day.

Got some munch and headed for the hostel roof bar to watch a rather dull Holland v Argentina game, although the finale was dramatic and the Dutch got knocked out, which pleased the Mexicans (Holland controversially knocked Mexico out in the previous round).

We then hit the beach again for more rum and tunes, all of which was made even more special by the Argentinian fans celebrating in the sea (see above)!

After that, we’d been invited to Aussies house up the road for dinner so headed up around 9PM with another bottle of rum. Jewan joined us for that, a lad from Corsham who knew a few of the footie boys.

Had some good grub and the three of us headed out to the strip for a few bevvies and some dancing, again, all wrapped up at about 4.30AM! Hit the hay thereafter and endured another drunk and insanely sweaty night sleep!